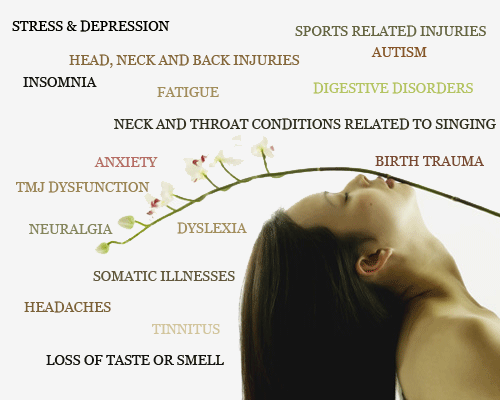 Why Have Emotional Release Therapy …to feel better by releasing the stress of stuck emotional energy and reducing the resulting physical somatic symptoms.

Some physical conditions that improve with ERT are:

Headaches (pain caused by a disturbance of the pain-sensitive structures around the brain) · Digestion problems (which can develop other stomach and intestine problems, such as eating disorders or acid reflux)  · Genito-urinary conditions (problems that can affect the  reproductive organs and the urinary system) · Chronic pain throughout the body (A chronic pain is one that extends beyond the normal expected  period of healing)  · Pain caused by accidents and injuries (pain that occurs from car accidents, sports injuries or other general accidents and injuries that may occur at home, on the job or in other daily life activities)

The emotional energy associated with the following conditions is often released with EERT:

Grieving (which is multi-faceted response to loss of someone or something in which you had a bond) · Depression ( a prolonged state of low mood or aversion to activity)  · Bipolar problems ( which can be defined by the presence of one or more episodes of abnormally elevated energy levels, cognition, and mood with or without one or more depressive episodes)  · Separation issues (a psychological condition in which an individual experiences excessive anxiety regarding separation from home or from people to whom the individual has a strong emotional attachment) · Anxiety ( which is a psychological and physiological state characterized by somatic, emotional, cognitive, and behavioral components)  · Stress (referring to the consequence of the failure of an organism – human or animal – to respond appropriately to emotional or physical threats, whether actual or imagined)  · Panic disorders (an anxiety disorder characterized by recurring severe panic attacks. It may also include significant behavioral change lasting at least a month and of ongoing worry about the implications or concern about having other attacks)  · Somatic disorders ( dealing  with  parts of the peripheral nervous system that areassociated with the voluntary control of body movements via skeletal muscles, and with sensory reception of the bodies senses)  · Co-dependence issues (dealing with  tendencies that cause one to behave in overly passive or excessively caretaking ways that negatively impact one’s relationships and quality of life) · Post-traumatic stress issues (is a severe anxiety disorder that can develop after exposure to any event that results in psychological trauma that can overwhelm and inhibit an individual’s ability to cope to deal with everyday life)  ·Abuse issues (issues that deal with the improper usage or treatment that may often lead to unfairly or improperly gaining  benefit, physical or verbal maltreatment, injury, sexual assault, violation, rape, unjust practices; wrongful practice or custom; offense; crime, or otherwise verbal aggression)

The above is only a partial listing of the conditions that respond well to EERT. The end result is that people feel so much better. Clients generally experience a “new lease on life.”

Much of the emotional pain that sends people to counseling is stored in the body as stuck energy, and thus is the cause of many physical conditions. Our enculturation has kept us from freely expressing emotions to being constipated emotional pressure cookers. We are taught not to express our emotions and are often shamed and abandoned if we do.

The therapist provides a safe supportive place for the client to express the emotional energy. Sometimes emotions such as sadness, rage, or fear are overwhelming, or childhood taboos restrict emotional expression. It is then necessary for the therapist to give support to the client. Some clients may fear that once they start to release emotions, they won’t be able to stop. The fact is, most people are in too much control, and will only release as much as they can handle at one time.

Many clients who experience anxiety attacks and hyperventilation will no longer experience them after a few sessions.

Many clients who are in psychotherapy, or are seeing a counselor, will start having significant gains with their psychotherapist or counselor when they had previously been stuck due to stuck painful emotional energy.

Often chronic diseases or physical dysfunctional conditions of the body will show significant improvement when the emotional energy that was restricting the area of dysfunction has been released. This can include but not be limited to digestion, genitor-urinary conditions, headaches, chronic pain, breathing, glandular conditions.

EERT is successful because once stuck emotional energy is released most people are capable of solving their own problems.